(EVEN IF YOU HAVE DEVELOPED BAD HABITS OVER THE YEARS AND CAN’T PLAY VERY FAST…)
Play Video
sign up now!

YOU HAVE GREAT THINGS TO SAY MUSICALLY

BUT YOUR TECHNIQUE IS HOLDING YOU BACK…

…and so you feel frustrated because of the following:

(Even though you have tried all the exercises…)

YOU CAN’T PLAY ALL OVER THE FRETBOARD

(Because you can’t remember all the scales…)

(Even though you’ve been playing for years…)
First, know that you are no alone. Most guitar players feel the frustration of not being able to fully express themselves on the guitar because of a lack of proper technique and speed. The reason you feel limited in your technical ability is because most lessons on the topic are either too difficult, or too basic. That’s a real problem.
Yes, SIGN UP NOW!

What if I told you that there was a set of very specific exercises that can quickly transform any player’s technical ability, into controlled precise execution of any musical idea no matter the speed it is played at. Sounds crazy, right? I never believed such a thing existed until I decided to finally do something about my sloppy technique after playing for over 25 years…

I had been frustrated with my technique for a very long time. Not that I wanted to become the fastest player alive, but I wanted to be able to play the ideas in my head without feeling the limitations of technique. I knew I had things to say musically, but it’s almost as if they were stuck inside because my fingers weren’t able to execute them.

I never had any success with all the typical technique exercises available out there. They seemed to be so unmusical and never really helped me gain the ease that some players seem to have. Very frustrating. So I decided to do something about it.

I took a surgical approach to the mechanics of playing guitar. What I discovered is that in order to comfortably play guitar without feeling limited by technique, certain movements need to be developed. Those movements insure proper hand positions which results in much more comfort and speed. I developed a series of musical exercises based on those movements and started using them in my practice time. After 10 days of playing the exercises for 5 minutes each day, I was able to play with more precision, speed and comfort than I was ever able to achieve in my 25 years of playing guitar.

This was 10 years ago. I have since refined those exercises and created a full course around them called Elemental Speed. 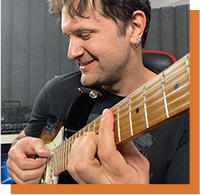 Over the past two decades I’ve helped over 5,000 adult guitar players build stellar technique and fully express themselves on the instrument.

What I have found is that long time guitar players who still can’t freely express themselves on the instrument are usually stuck in what I call the “pentatonic noodling stage”. They are good at playing a few pentatonic licks, but when it comes time to playing anything else than the same old licks they’ve been playing over and over, it just doesn’t sound very good.

After teaching thousands of guitar players how to break free from old habits and finally play with ease and comfort, I have decided to condense everything I’ve been teaching my private students into a super simple to follow, no nonsense step-by-step program I call Elemental Speed.

IMPROVING TECHNIQUE ON YOUR OWN DOESN’T WORK.

“After decades of sporadic fits and starts, I am enjoying new leaps forward as a guitar player, and having more fun than ever. Thanks David! Dan BarettGuitar Playback Student
“So far the course has helped me think differently about basics… from the fret board to how I practice and what I am trying to achieve.

Steve BruceGuitar Playback Student
“Great course which ensued confidence with my instrument and explore interconnection between modes and positions. David is a great scholar taking you with hands on the instrument. DAVID’S LESSONS HAVE BEEN FEATURED ON…

YOU ACTION PLAN TO GREAT

01
ENROLL IN THE COURSE

Purchase your lifetime access to the Elemental Speed course.

Watch each video in order and go through every exercise in order.

Enjoy playing the guitar without being limited by your technique.
Start Learning From David Today

IT’S NOT ALL ABOUT SPEED…

Music is a language. If you’ve ever learned how to speak a foreign language, you most likely spent time trying to replicate some of the unique sounds of that language. For example, if your first language is English and you are learning French, it is difficult to produce the sound for the letter “r”. That sound requires your larynx to be involved and that is not a muscle often used in the English language. The same exact thing happens with music. The reason most guitar players are not able to fully express themselves musically is that most of us weren’t taught how to properly develop the muscles involved in mastering the instrument.

This is exactly what the Elemental Speed is. In Elemental Speed, you will learn simple exercises specifically created to warm up and develop the essential muscles needed to effortlessly play the guitar without feeling any pain or discomfort. As you work through the guided exercises, you will learn how to master the 3 essential speed techniques used in modern music. You will develop a strong and precise alternate picking technique. You will also master the legato technique popularized by players such as Alan Holdsworth or Joe Satriani. And you will also learn about the economy picking technique which combines sweeping and alternate picking.

The beauty of this course is that in addition to developing your technique the right way, you will also learn how to apply it in a musical way. The end goal of developing your guitar technique is to break down any technical barrier that prevent you to fully express yourself musically. By the end of the course, you will be able to apply whatever idea you have and this regardless of the style of music you are into.

THE CHANGE YOU HAVE BEEN WAITING FOR

Let’s be real for a minute. If you are still reading this, it means that you are currently frustrated as a guitar player. I’m not saying that you are a bad player – as a matter of fact, many Elemental Speed students have been playing for decade – but you know that something is not quite right. You know the licks, you know some scales, and yet… You know that you are not where you want to be musically.

Elemental Speed is the missing key that will make you a GREAT guitar player, fully in control of your instrument. You will become an expressive player that feels confident in any musical situation. But you are also probably wondering “how much is this going to cost me?”

Putting a price on the absolute freedom of expression that you will enjoy after going through the course is not easy… Would you pay $1,000 to be able to play from the heart anytime you pick up your guitar? It would certainly be worth it. But $1,000 is a lot of money… Would you pay $500? That would be a bargain, especially considering that you get lifetime access to the full course. But that is not what you will pay. You’re not even going to pay half of that amount.

When you sign up today, you’ll receive instant access to the full Elemental Speed course for a single payment of $67!

The course has been carefully structured to help students progress fast. You will be guided through each exercises in a way that ensures you start seeing changes in your playing from the very first day.

Exercises are pointless if they can’t be used to create music. Each section comes with practical musical examples illustrating the techniques you will learn. Tablatures and HD backing tracks for each example are included in the course.

Elemental Speed was created to take you from wherever you are at on the instrument and rebuild your technique from the ground up without giving you the feeling that you are starting guitar all over again.

The videos are very simple to follow and carefully planned to ensure you can quickly implement everything you learn.
Play Video
Play Video

You will learn how to very quickly develop your technique through very specific exercises that target the right muscles.

You will learn how to very naturally navigate the full fretboard and focus on the music without getting confused by scales and patterns.
Play Video
Yes, sign me up!

When you sign up this week, you will also receive three limited time bonuses that will help you make the most of the ELEMENTAL SPEED course.

First, you will get the Picking Workshop which includes 25 highly effective alternate picking exercises that will take your picking chops even further!

I’m also going to include the awesome Sweeping Mechanics course which dramatically increases your sweeping speed with 25 progressive sweeping ideas.

Last but not least, when you sign up today I’ll also include my Melodic Sequences Pack which is a collection of very useful melodic ideas you can use to kickstart your melodic journey.

($97 value)
Injecting the sequences you’ll learn in this workshop will truly help your solos sound more interesting and melodic.

The option below comes with the full course and all announced bonus content!